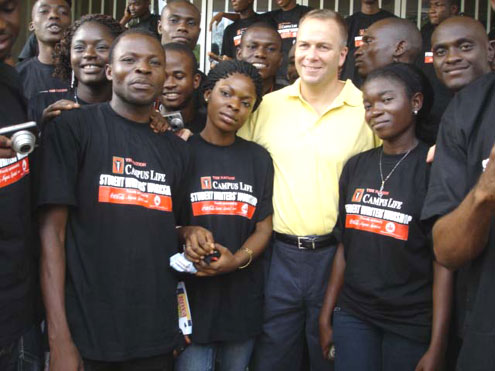 It was a moment of unlimited fun for brightest of Nigerian campus writers from different institutions across the country at the just concluded 5th edition of Campus Life Writers’ Workshop tagged Leadership 101 which was sponsored by Coca-Cola Nigeria Limited and the Nigerian Bottling Company (NBC) Plc.

The students were hosted for three days, between Friday 14 and Sunday 16 of May, 2010 at Mainland Hotel, Oyingbo, Lagos State.

During the three-day workshop, the participants were enlightened about writing techniques and they visited Silverbird Galleria, Lagos Bar Beach and the NBC plant in Ikeja.

In a chat with Campus Square, The Nation’s Campus Life editor, Miss Ngozi Nwozor, said Campus Life is a platform where students, irrespective of their schools and background, expressed themselves via the media.

Aunty Ngozi, as she is fondly called by the students, said the idea of Writerâ€™s Workshop was to celebrate excellence and hardwork of the students, adding that the gathering served as an educational arena and as well an interactive session between various students representing several campus of both universities and polytechnics.

The presence of the Managing Director of Coca Cola Nigeria Limited, Mr. Islay Rhind, and the representative of the Chief Executive Officer (CEO) of Continental Broadcasting Service (TVC), Mr. Dele Alake, also added glamour to the event. The students also visited Vintage Press Limited, the publisher of The Nation Newspaper where they were received by the company’s Managing Director, Mr. Victor Ifijeh, and other members of the Editorial Board.

Addressing the students, Mr. Ifijeh assured the hardworking student writers of a special job consideration with the company after graduation and NYSC year, urging them to continue writing for the Nation Campus Life.

Some of the participants related their experience with Campus Square. One of the students, Opeyemi Dibua from UNAD said the experience was so nice and the lecture by the MD of Coca-Cola helped change many ofÂ his thoughts.

The writer of this page is also a writer for Â Campus Life and has also benefited from the good gesture.